Cloud storage for your business

We’ve talked about the basics of the cloud, and went more in-depth on the topic in our free ebook. But another important aspect of cloud computing you need to consider is cloud storage. How does it impact your day-to-day operations? And if you do switch to the cloud, which storage option is right for your business?

Cloud Storage: what exactly is it?

Cloud storage is a method of storing files on the web. Instead of storing your files locally, on a hard drive, a local server, or external storage like a USB device, cloud storage houses all files at the cloud provider’s server warehouse. Each file is then accessible only via the internet.

To start, it’s important to go over precisely what various cloud storage providers offer. There are five big cloud computing providers globally that we will look at. Google Drive, Dropbox, Box, and Microsoft OneDrive each offer a locally-installable program that synchronizes your local files onto the company’s servers.
As an aside, Amazon Web Services, or AWS, operates differently in that it provides an entire infrastructure for cloud computing by weaving together a variety of services. AWS offers no traditional desktop interface, and is a bit more technically involved to set up. It is, however, the largest provider of cloud storage.

Amazon Cloud Drive, however, is Amazon’s recent foray into traditional cloud computing, and offers much of the same functionality of Google Drive, Dropbox, Box, and OneDrive.

At the heart of each program is a desktop application. Just like any other piece of software, users download these apps from their respective websites, then open the executable file to install it (the exception to this rule is Windows 8.1, which comes with OneDrive preinstalled). Let’s illustrate with Dropbox as the example (features are similar for the other services).
Once installed, Dropbox creates a special folder on your computer. That folder is the core of the app’s functionality. Any file placed inside that folder is automatically uploaded to Dropbox’s servers, thanks to a synchronization daemon that constantly runs in the background. First and foremost, that means that each and every file inside that folder is automatically backed up to the cloud. Second, because the file is in the cloud, it’s accessible on any device that has Dropbox installed and has an internet connection.
To access that file from another device, the Dropbox app must be installed on that device. There are apps available for nearly any platform: iPhones and iPads, Android devices, Windows and Mac desktops, etc. Once the app is installed, users can open it, navigate to the file they are looking for, and download on their device to view locally.

It’s a simple premise: one file exists across many devices. On top of that premise, though, some powerful computing options can be built. Sharing is one example. If you’re on the desktop version of Dropbox, you can simply right-click a file to bring up its menu, which includes the option to share the file by copying the web link to it. Sending that link to others, via email, social media, or instant messenger, gives others access to the file. It is, arguably, the easiest way to share files. Sharing files via mobile apps is just as easy.

Entire folders on desktop computers or servers can be synchronized automatically. When a file is uploaded to Dropbox from one computer (which happens automatically, remember), that file is also automatically downloaded to any desktop computer linked to that account. So if Joe adds a file on his computer, it will also appear on Jane’s workstation without any input from her.

Which leads us to the next benefit: having the same version of the file available across devices and users. Think of the version of the file that exists on Dropbox’s servers as the master file. When Joe or Jane make a change from their computer, the file that’s uploaded replaces the existing file, becoming the new master file. So no matter who accesses the file or from where, everyone will be working with the same, updated version of that file.
Previous versions, though, will still be available. If Joe or Jane need to revert to a previous version, they can simply go through the revision history and restore the master file from any of those older versions.

Pricing, of course, is a primary consideration when choosing a cloud provider. For the most part, pricing is even between each company, and each company constantly updates their pricing to reflect a changing market.
At the time of publishing this article, 1 terabyte of storage costs AUD$10.99 per user per month on Dropbox, AUD$11.40 per user per month on Google Drive, and Microsoft’s OneDrive is AUD$9.00 per user per month including an annual subscription to Office 365.
Business pricing differs: Dropbox offers unlimited storage for a minimum of five users for AUD$17 per month, for example.

If all of that sounds confusing, keep this in mind - cloud storage services are constantly changing, and pricing is just as liquid. There is no substitute for doing your research.

Features unique to each provider

Aside to the basic functionality, each provider also offers features that differentiate them from each other. For example, Google’s offering includes its built-in, web-based office suite, Google Docs, which offers superior real-time collaboration with powerful editing and chat built into the interface. Microsoft’s OneDrive includes an app for its Xbox gaming console, and better integration with its own Microsoft Office. Dropbox is popular with software developers, which means better third-party integration with a host of other applications.
That’s not to mention the providers outside of the big three, which include Box, Copy, and SpiderOak, just to name a few. Knowing which provider is right for your business can be confusing, which is why we recommend talking over the options before committing to any single provider, so that you find the right match for your particular needs.

Given the many benefits of cloud providers, it’s easy to forget that, like any new technology, there are risks. The nature of the cloud is to make files available as easily as possible to you and your colleagues. That also lends itself to security risks - by granting you easier access to your files, cloud providers also grant easier access to would-be hackers.
In other words, storage providers are a constant target. Instead of targeting individual networks or computers, it’s much more enticing for a hacker to target the cloud storage provider itself, since millions of users’ data are now in the same place. Some of that threat is offset by the fact that cloud providers tend to implement much more sophisticated security measures than would typically exist in the average office environment. Nonetheless, the threat is greater in the cloud.
When a breach does happen, the mere fact that internet speeds have increased exponentially also makes it easier for data thieves. Where it once took minutes, even hours, for a hacker to retrieve large files over the internet, that same file can now be retrieved in seconds.

Another risk you will certainly face is the feeling that you are relinquishing control of your data and placing your trust in your cloud storage provider to protect it on your behalf. Fortunately, cloud encryption can provide an added level of management and peace of mind. If you encrypt anything before you send it out from your own environment you maintain a level of control and an added level of authority over your data - not to mention peace of mind that you data is secure when it's pushed to the cloud.

While there are risks, cloud computing continues to be a smart option for many and offers significant benefits.
Before you move to the cloud we recommend looking at several providers so you can choose the one that is right for your business, in the interest of helping you make a more informed decision.

In the meantime, we’re here to answer any questions you might have. Give us a call on 02 4254 5444 or email us. to discuss cloud storage options and what might be best for your business. 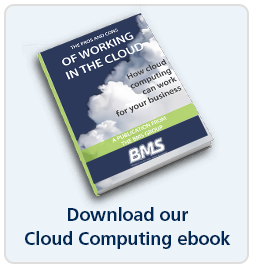